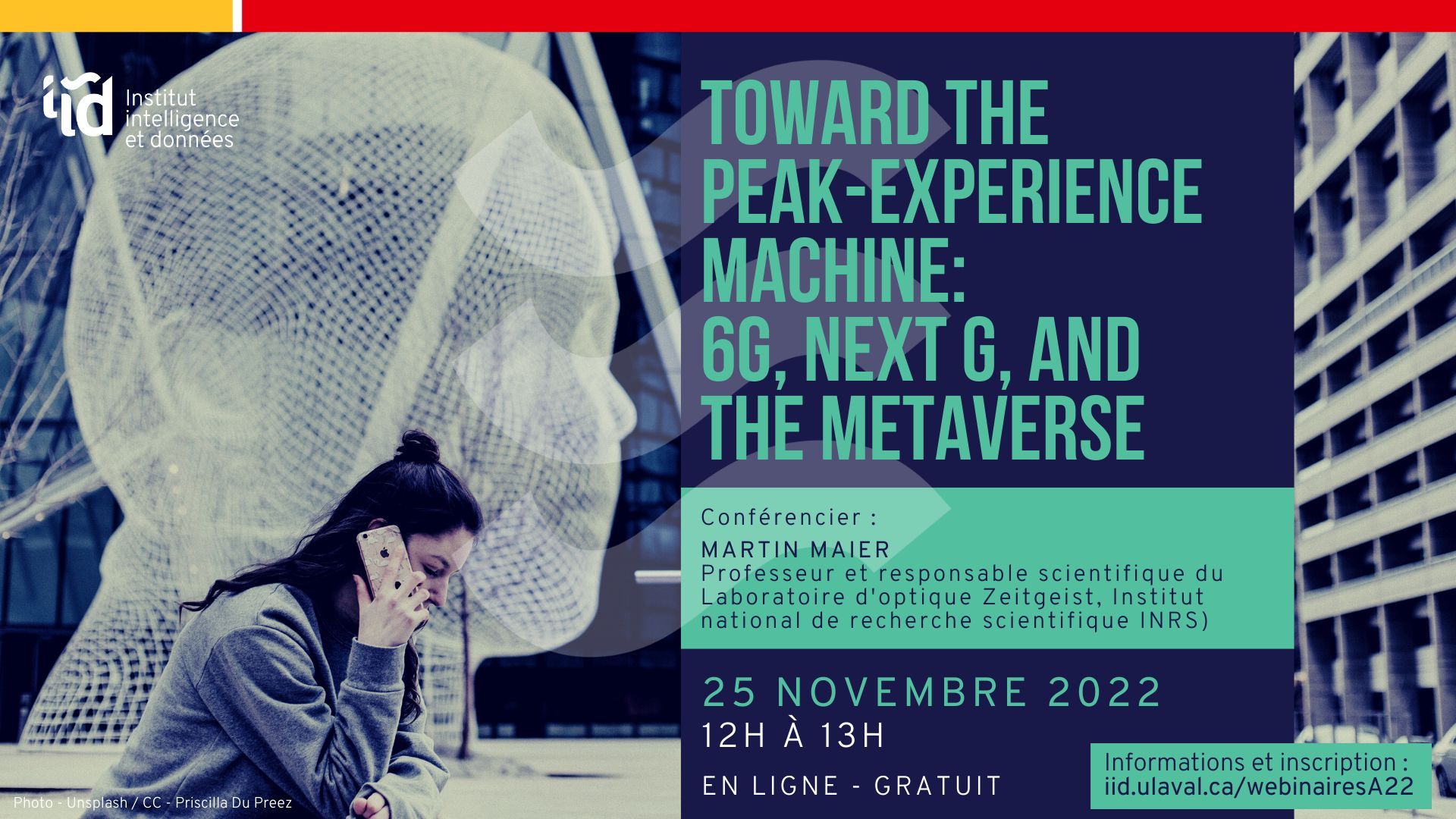 Toward the Peak-Experience Machine: 6G, Next G, and the Metaverse

This webinar by INRS professor Martin Maier aims to present a holistic narrative on future 6G and Next G networks that goes beyond the incremental 6G=5G+1G mindset of previous generations of mobile networks. Alongside the audience in attendance, he will focus specifically on the emerging Metaverse, the anticipated successor to today’s mobile Internet.

Johannes Gutenberg’s invention of the printing press in 1450 revolutionized society and heralded 300 years of renaissance. While Gutenberg’s invention gave birth to printing, the Internet’s full potential still remains to be unleashed in the years to come. We do not yet know what the Internet truly is, though its impact is anticipated to be eventually similar or even superior to that of the printing press. Measured in Gutenberg time, we stand today at about the year 1481 with the progression of disruption in society. Note that Luther was born in the year 1483. Hence, the Internet’s Martin Luther is yet to come.

This webinar offered by Martin Maier, of INRS, aims at presenting an overarching narrative for future 6G and Next G networks, which go beyond the incremental 6G=5G+1G mindset of past generations of mobile networks and also involve major over-the-top Internet players, including Apple, Google, Microsoft, as well as Facebook. We focus particularly on the emerging Metaverse, the anticipated successor to today’s mobile Internet, which will be about being inside the Internet (rather than simply looking at it from a phone screen) and producing peak-experiences. This is in contrast to only printing pamphlets about them, as Luther had to do in a pre-Internet era.

He was a visiting professor at Stanford University, Stanford, from October 2006 through March 2007. He was a co-recipient of the 2009 IEEE Communications Society Best Tutorial Paper Award. Further, he was a Marie Curie IIF Fellow of the European Commission from March 2014 through February 2015. In March 2017, he received the Friedrich Wilhelm Bessel Research Award from the Alexander von Humboldt (AvH) Foundation in recognition of his accomplishments in research on FiWi enhanced mobile networks. In May 2017, he was named one of the three most promising scientists in the category “Contribution to a better society” of the Marie Skłodowska-Curie Actions (MSCA) 2017 Prize Award of the European Commission. In winter 2019/20, he held a UC3M-Banco de Santander Excellence Chair at Universidad Carlos III de Madrid (UC3M), Madrid, Spain.