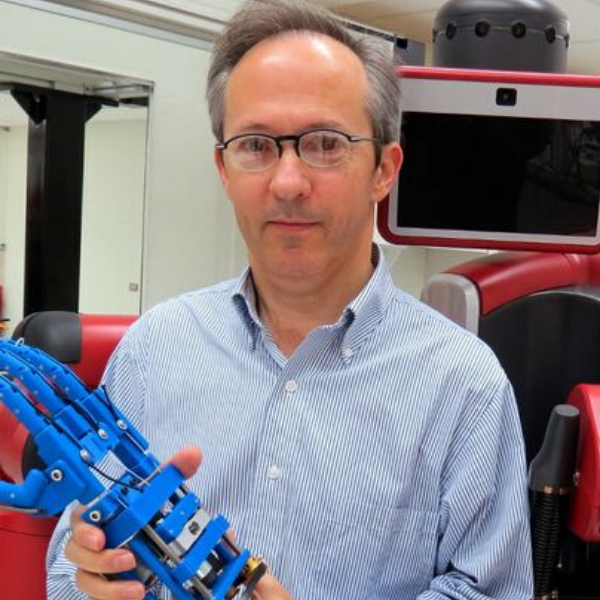 Clément Gosselin received a Bachelor’s degree in Mechanical Engineering from the University of Sherbrooke in 1985 and a Ph.D. in Mechanical Engineering from McGill University in 1988. He then completed a post-doctoral internship in France at INRIA Sophia-Antipolis in 1988–89. In 1989, he began his teaching career at Université Laval where he now holds the Canada Research Chair in Robotics and Mechatronics since 2001. He was a visiting researcher at RWTH in Aachen, Germany in 1995, at the University of Victoria in 1996 and at IRCyN in Nantes, France in 1999.

His research interests focus on the kinematics, dynamics and control of mechanorobotic systems, with a particular emphasis on gripping mechanics, the kinematics and dynamics of parallel mechanisms and the development of new generation collaborative robots. His work in these areas of research has been the subject of numerous publications in scientific journals and international conferences (cited over 31,000 times) as well as several patents and two books. He has led several research initiatives, including collaborations with Canadian and foreign companies, and he has led the research work of more than 120 graduate students. He is currently associate editor of the ASME Journal of Mechanisms and Robotics.

Professor Gosselin has received several awards, including the ASME DED Mechanisms and Robotics Committee Award in 2008, the ASME Machine Design Award in 2013 and the IFToMM Award of Merit in 2019. He was named an Officer of the Order of Canada in 2010 for his contributions to research in the field of parallel mechanisms and under-actuated systems. He is a Fellow of ASME, IEEE and the Royal Society of Canada.